This Is A Custom Widget

This Sliding Bar can be switched on or off in theme options, and can take any widget you throw at it or even fill it with your custom HTML Code. Its perfect for grabbing the attention of your viewers. Choose between 1, 2, 3 or 4 columns, set the background color, widget divider color, activate transparency, a top border or fully disable it on desktop and mobile.

This Is A Custom Widget

This Sliding Bar can be switched on or off in theme options, and can take any widget you throw at it or even fill it with your custom HTML Code. Its perfect for grabbing the attention of your viewers. Choose between 1, 2, 3 or 4 columns, set the background color, widget divider color, activate transparency, a top border or fully disable it on desktop and mobile.
Toggle SlidingBar Area

In the reconciliation room of my church hangs a painting of the “Woman Caught in Adultery” crafted by Brother Mickey McGrath, OSFS. In that depiction the angry crowd stands to the left and the humiliated woman stands to the right. Jesus stands in the middle. Reading the account from John’s Gospel, however, I always get the feeling that the crowd is surrounding her. What Mickey’s art helped me realize is that even if they were not surrounding her physically, still they had enclosed her. She was encircled by their hate, by their impending violence, by their plots, by their willingness to use her and then discard her. They had created the unbreakable trap and she was caught in its teeth. Jesus, of course, broke the trap with unexpected acts of gentleness aimed at both the woman and her accusers. Jesus could have embarrassed those cruel abusers with blunt revelations of their own transgressions, but he gave them the chance to walk away and repent, which is the same choice he gave to the woman. He lifted the woman out of the darkness that had ensnared her, freeing her to live a better life, which is the same freedom he offered those who would have taken that life so cavalierly. Through his gentleness and his grace, Jesus transformed an ugly and potentially bloody situation into a call to holiness. That call embraces all of us. 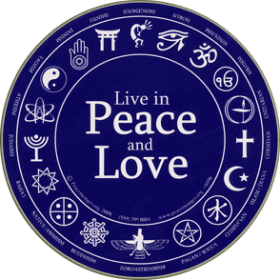 Reflecting on the above account makes me think that the call to holiness always occurs within a specific context, which for the adulterous woman and her accusers may not be so different from our own. She was surrounded by violence, anger, hate, plots, and disregard for the value of human life. Nightly news reports suggest to me that we are bounded by those same forces, even if the players and their tactics have changed. In his apostolic exhortation, Gaudete et Exsultate, Pope Francis states his goal of situating the call to holiness within the context of our modern world and remarks that this call exists regardless of our specific vocation. He advises that each of us has a mission, “planned by the Father to reflect and embody, at a specific moment in history, a certain aspect of the Gospel.” St. Francis de Sales recommended something similar when he counseled his adherents to serve God in the very circumstances of life in which God placed them. We don’t need to seek a new state in life to live the mission of the Gospel; we only need to let the Gospel come to life in our present setting. If the forces in our world are like those of the adulterous woman, then perhaps gentleness is our mission at this specific moment in history. Gentleness is a virtue all of us can live to great effect.

Quoting Pope Pius XI, Patrick Madrid, in His book On a Mission: Lessons from St. Francis de Sales, noted that St. Francis de Sales excelled in “meekness of heart”. This meekness was displayed as true gentleness toward others and not the facile polished manners and affability of the socially sophisticated. Rather, St Francis’ gentleness reflected genuine compassion and tenderness that flowed from his love of God. In John’s Gospel (3:16), we read, “For God so loved the world that he gave his one and only Son, that whoever believes in him shall not perish but have eternal life.” St. Francis understood that this meant that he was deeply and irrevocably loved by God and he knew that God loves all people with this same love. In the Introduction to the Devout Life, DeSales writes: “When did God’s love for you begin? When He began to be God. When did he begin to be God? Never, for He has always been without beginning and without end, and so He has always loved you from all eternity.” God’s love for us has no limit, not even the limit of time. In his Treatise on the Love of God, Francis states that: “God pours His love no less over one soul, though He loves it with an infinity of others, than if He loved that one only.” No matter how many people or how difficult they might be to love, God loves no one less than another. St Francis de Sales understood his call to holiness in light of this unlimited love. As the Holy Father remarks in Gaudete et Exsultate, our mission “has its fullest meaning in Christ and can only be understood through him.” Embracing the unlimited love of Christ, St. Francis de Sales embraced his brothers and sisters by imitating that love. Gentleness flows naturally from St. Francis’ understanding of the love that God bears him. In my distillation of St. Francis de Sales, he sees that our inestimable value comes from God’s love for us, whom he loves equally. Once we accept that, we are drawn to treat our fellow human beings as precious. We seek to honor, uplift, and celebrate the gift that God has created them to be. This is what gentleness does. This is what gentleness is.

The violence of our world is a clarion call for gentleness, and it doesn’t take much effort to remember how acutely our nation has been plagued in this way. School and mass shootings, open discrimination based on gender and race, sexual harassment and assault, and global and domestic terrorism are a few broad examples. Globally, violence has displaced more than 65 million people as they seek safety from the reported 402 conflicts taking place around the world. These conflicts have triggered extreme poverty, hunger, and unstable governments. In Gaudete et Exsultate, Pope Francis reminds us, “Blessed are the meek, for they will inherit the earth.” He notes the challenge of this beatitude: “These are strong words in a world that from the beginning has been a place of conflict, disputes, and enmity on all sides, where we constantly pigeonhole others on the basis of their ideas, their customs, and even their way of speaking or dressing.” This is part of the context in which we can progress in holiness, and it is filled with opportunity. Pope Francis repeats Christ’s exhortation: “Learn from me, for I am gentle and humble of heart.” Gentleness is a ripe path to holiness since there is no shortage of the need for this virtue in our world today.

Pope Francis challenges us to face these conflicts head on: “We need to be artisans of peace, for building peace is a craft that demands serenity, creativity, sensitivity, and skill.” Perhaps the skill most in demand in this regard is really a virtue, gentleness. But how do we begin? We begin with an act of humility, embracing the fact that we are not able to bring gentleness to the world all by ourselves. When Jesus ended the conflict between the woman and those condemning her for adultery, he stepped between the haters (the accusers) and the hated (the woman) as both God and man. His human gentleness was given supernatural strength by his grace as the son of God. We do not bring the virtue of gentleness to conflict without the grace of God. De Sales points out that as we serve the Lord we are surrounded by snares and obstacles. He says, “If you are faithful along this journey, you will have a consolation greater than every challenge.” St Francis tells us to lift up our hearts! because the Lord watches over us, sending us his help and his blessing. Pope Francis tells us in Gaudete et Exsultate, “This holiness to which the Lord calls you will grow through small gestures.” For St. Francis de Sales, these small gestures are larger than we think: “There is nothing small in the service of God.” Not only do we grow personally in our holiness by spreading gentleness, but we help to reduce the conflicts that threaten us and others. The small ways that we bring gentleness to those beset by violence will have a greater impact than we can see or even imagine.

Jesus stood between a group of haters and the one they hated. He gently sent both away so that they could consider how to live their lives better, how to become holier, and how to come back together as friends. As we bring this gentleness to others, we become holier and help others to find their own path to holiness. This is the strength of gentleness. In our path to holiness, we can share this strength with the world.